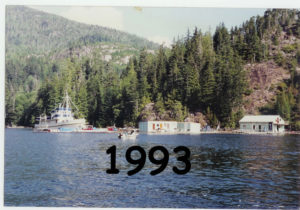 without hiring guides, so he started the ball rolling by applying for a foreshore lease in Tlupana Inlet. His brother Dean, Laura and his folks, Cam Sr. and Julie, joined him once the lease was obtained. They bought a retired fish farm with hundreds of feet of dock and one floating building from Little Espinosa, and towed it into place. They added four bunkhouse rooms, a hand pump for gas, a coffee pot – and opened in 1993.

Since then almost every year there has been an addition, expansion or reconfiguration making Critter Cove the place for fishermen it is today.

The family expanded too. In 1996 Catherine moved to Nootka to work at another lodge. After several boat rides in between lodges, they married in 1998. Bryce and Tucker followed in 1999 and 2000.

Catherine also comes from a fishing background. Her grandparents opened Painter’s lodge in the 1930s, and although it was sold from the Painter family in 1949, many of the family are still avid fishermen.  Catherine was a salmon fishing guide in Campbell River for a dozen years before venturing to Nootka.

You’ll see Cam Sr., Julie, Cameron, Catherine, Bryce and Tucker on the main docks.   Julie makes all the fresh pies, her famous bread pudding, and other desserts in the Critter Cafe.

Nootka is called “The birthplace of BC” and was the first stop Captain Cook made in North America in 1778. The first European in BC was Juan Perez from Spain in 1774. Both Perez and Cook met the Mowachat people at Yuquot (Friendly Cove) and traded with them, which was the start of the sea otter fur trade.

Here is a detailed history of Nootka

Here’s the story of John Jewitt who was held captive for two years by Chief Maquinna at Friendly Cove.

In addition to all the history at Friendly Cove – it’s just beautiful and well worth a visit.